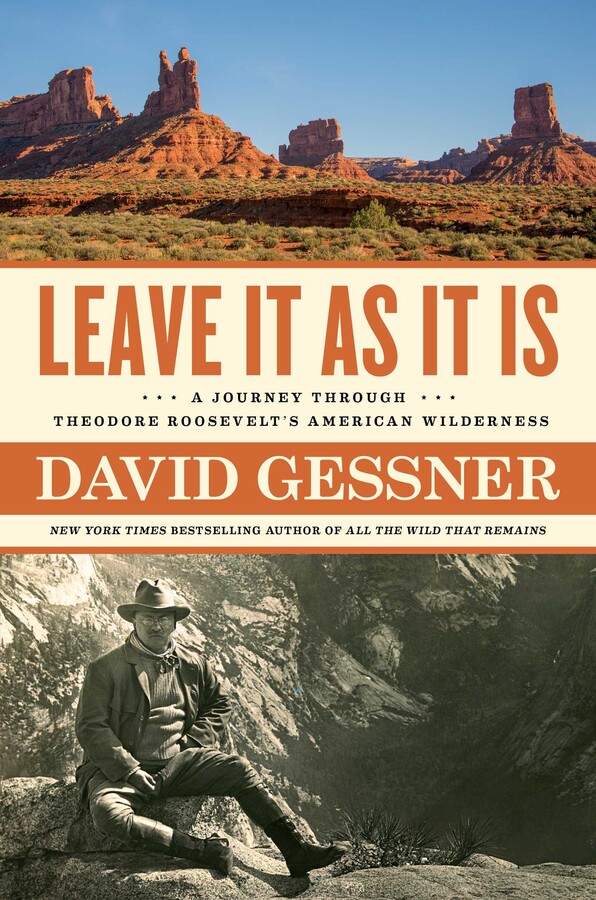 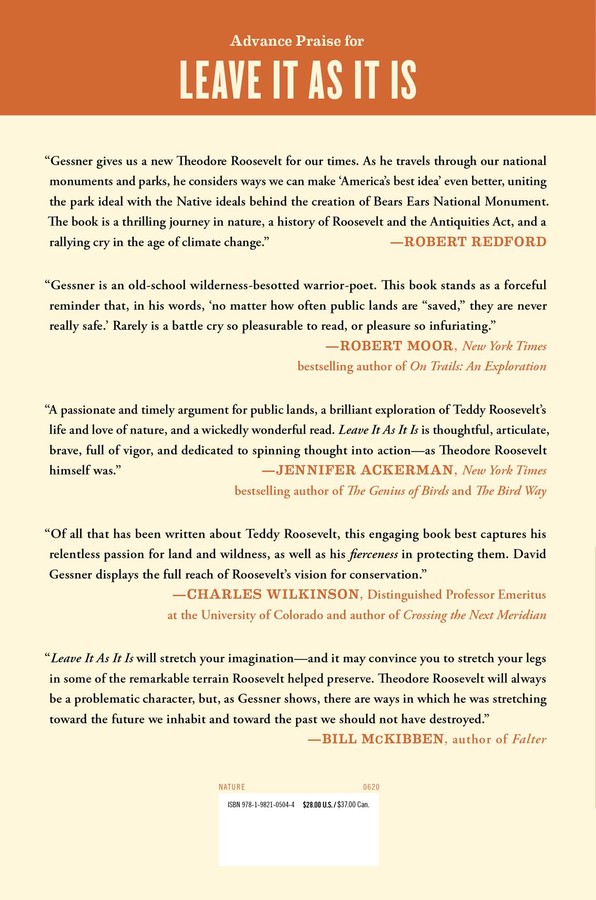 Leave It As It Is

“A rallying cry in the age of climate change.” —Robert Redford

“Leave it as it is,” Theodore Roosevelt announced while viewing the Grand Canyon for the first time. “The ages have been at work on it and man can only mar it.” Roosevelt’s rallying cry signaled the beginning of an environmental fight that still wages today. To reconnect with the American wilderness and with the president who courageously protected it, acclaimed nature writer and New York Times bestselling author David Gessner embarks on a great American road trip guided by Roosevelt’s crusading environmental legacy.

Gessner travels to the Dakota badlands where Roosevelt awakened as a naturalist; to Yellowstone, Yosemite and the Grand Canyon where Roosevelt escaped during the grind of his reelection tour; and finally, to Bears Ears, Utah, a monument proposed by Native Tribes that is embroiled in a national conservation fight. Along the way, Gessner questions and reimagines Roosevelt’s vision for today.

As Gessner journeys through the grandeur of our public lands, he tells the story of Roosevelt’s life as a pioneering conservationist, offering an arresting history, a powerful call to arms, and a profound meditation on our environmental future.

David Gessner is the author of ten books, including the New York Times bestseller All the Wild That Remains. He has taught environmental writing as a Briggs-Copeland Lecturer at Harvard and is currently a professor and department chair at the University of North Carolina at Wilmington, where he founded the award-winning literary journal Ecotone. Gessner lives in Wilmington, North Carolina.

"Gessner gives us a new Theodore Roosevelt for our times. As he travels through our national monuments and parks, he considers ways we can make 'America’s best idea' even better, uniting the park ideal with the Native ideals behind the creation of Bears Ears National Monument.??The book is a thrilling journey in nature, a history of Roosevelt and the Antiquities Act, and a rallying cry in the age of climate change.”
—Robert Redford

"Gessner is an old-school wilderness-besotted warrior-poet. This book stands as a forceful reminder that, in his words, "no matter how often public lands are 'saved,' they are never really safe." Rarely is a battle cry so pleasurable to read, or pleasure so infuriating."
—Robert Moor, New York Times bestselling author of On Trails: An Exploration

“A passionate and timely argument for public lands, a brilliant exploration of Teddy Roosevelt's?life and love of nature, and a wickedly wonderful read. Leave It As It Is is as thoughtful, articulate, brave, full of vigor, and dedicated to spinning thought into action as Theodore Roosevelt himself was.”
—Jennifer Ackerman, New York Times bestselling author of The Genius of Birds and The Bird Way

“Of all that has been written about Teddy Roosevelt, this engaging book best captures TR's?relentless passion for land and wildness as well as his fierceness in protecting them. David Gessner displays the full reach of Roosevelt’s vision for conservation.”
—Charles Wilkinson, Distinguished Professor Emeritus at the University of Colorado and author of Crossing the Next Meridian

“Leave It As It Is will stretch your imagination—and it may convince you to stretch your legs in some of the remarkable terrain Roosevelt helped preserve. Theodore Roosevelt will always be a problematic character, but as Gessner shows, there are ways in which he was stretching towards the future we inhabit, and towards the past we should not destroy.”
—Bill McKibben, author of Falter: Has the Human Game Begun to Play Itself Out?

“David Gessner’s scholarship, observations, and assessment of the American West comes not a minute too late. Any thunder we hear now is Theodore Roosevelt rolling over in his grave as the Trump administration proceeds with its feckless policies to liquidate our sacred public lands.”
—Rick Bass, author of For a Little While

“Facing the possible end of American democracy, Gessner revivified Theodore Roosevelt and took him west on a roadtrip to survey his legacy. At the top of his game, Gessner’s strong, intimate voice takes you along and you’ll be glad you went. What more could we need now than to remember what a president could be: a pugilist with a moral backbone, a Harvard-trained naturalist, a lover of literature who writes and speaks in complete sentences, and someone who, if born into wealth, values it far less than beauty and the survival of life on earth.”
—Jordan Fisher Smith, author of Engineering Eden

"This combination of environmental journalism, biography, and travelog introduces fascinating characters who will engage readers of environmental literature as well as Roosevelt enthusiasts."
—Library Journal

“Gessner delivers a thoughtful consideration of Theodore Roosevelt’s conservation legacy as president….[An] excellent look at the origins of environmentalism and an inspiring call to build upon what Roosevelt and other early environmentalists started.”
—Publishers Weekly

“Insightful, observant and wry, writing with his heart on his well-traveled sleeve and a laser focus on the stunning beauty of the parks, Gessner shares an epic road trip through these storied lands.”
—BookPage

"As we face environmental dangers unimagined in Roosevelt’s day, Mr. Gessner asks what TR would do with our surviving wilderness. The impassioned response: Leave it as it is."
—Wall Street Journal

Leave It As It Is