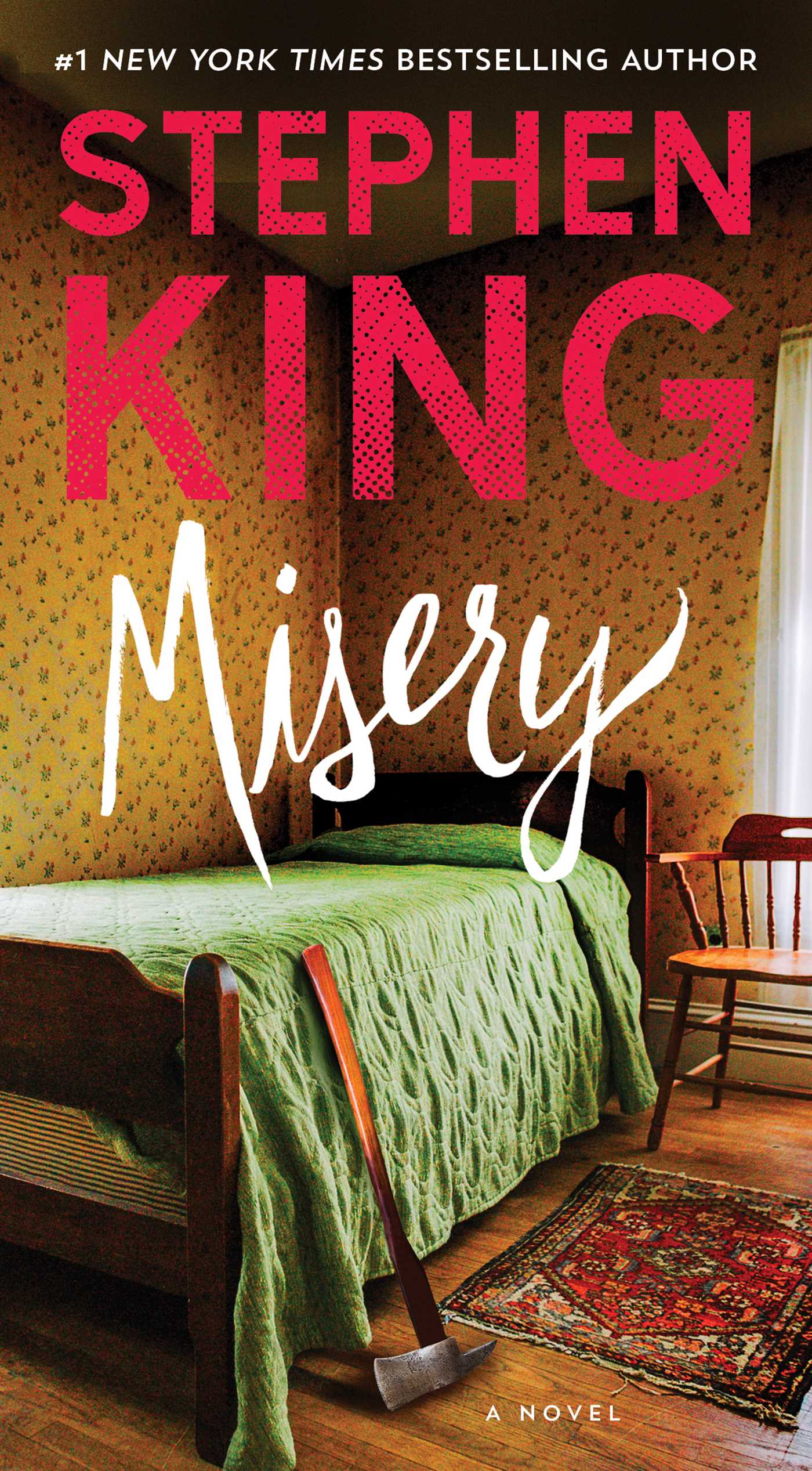 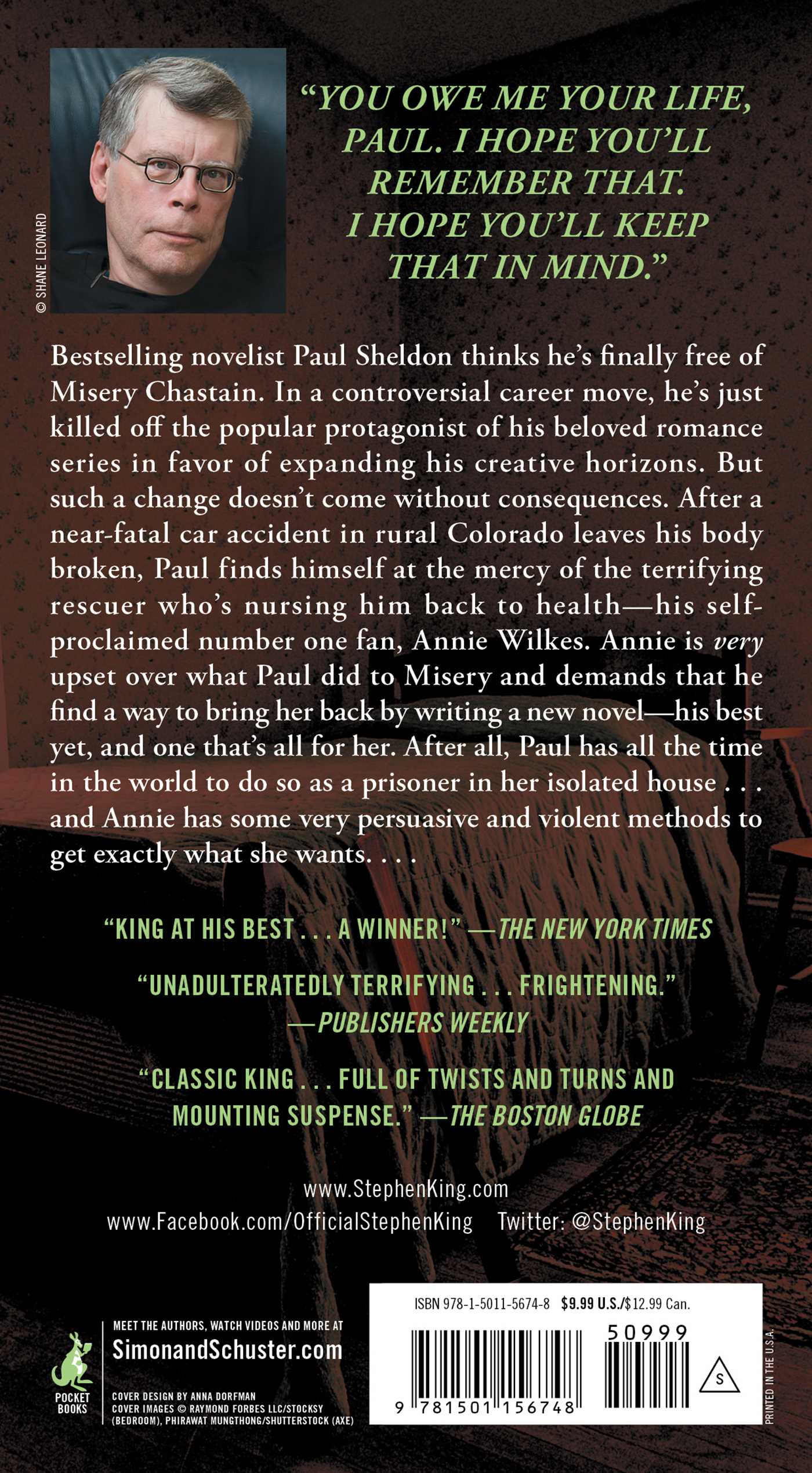 The #1 New York Times bestseller about a famous novelist held hostage in a remote location by his “number one fan.” One of “Stephen King’s best…genuinely scary” (USA TODAY).

Bestselling novelist Paul Sheldon thinks he’s finally free of Misery Chastain. In a controversial career move, he’s just killed off the popular protagonist of his beloved romance series in favor of expanding his creative horizons. But such a change doesn’t come without consequences. After a near-fatal car accident in rural Colorado leaves his body broken, Paul finds himself at the mercy of the terrifying rescuer who’s nursing him back to health—his self-proclaimed number one fan, Annie Wilkes. Annie is very upset over what Paul did to Misery and demands that he find a way to bring her back by writing a new novel—his best yet, and one that’s all for her. After all, Paul has all the time in the world to do so as a prisoner in her isolated house...and Annie has some very persuasive and violent methods to get exactly what she wants...

This reading group guide for Misery includes an introduction, discussion questions, and ideas for enhancing your book club. The suggested questions are intended to help your reading group find new and interesting angles and topics for your discussion. We hope that these ideas will enrich your conversation and increase your enjoyment of the book.

A famous novelist is held hostage by his “number one fan” while suffering a frightening case of writer’s block—how could things get worse? Stephen King finds a way as bestselling novelist Paul Sheldon matches wits with the deranged Annie Wilkes. As Annie nurses Paul after an automobile accident, she discovers that her beloved author has killed off her favorite character in his latest book. Annie then becomes Paul’s captor, insisting that Paul write a book that brings Misery back to life—just for Annie, or else. Annie has a lot of ways to inspire Paul. One is a needle. Another is an axe. Misery is “classic Stephen King . . . full of twists and turns and mounting suspense” (The Boston Globe).

1. Part I begins with the Friedrich Nietzsche quote “When you look into the abyss, the abyss also looks into you.” How does this quote set the stage for the “Annie” section of the novel and for Annie Wilkes herself?

2. Think of other characters like Annie in literature, such as Nurse Ratched from One Flew Over the Cuckoo’s Nest. What do these women have in common? Why are they so intimidating and frightening?

3. Though Paul has “spent most of his adult life thinking the word writer was the most important definition of himself” (page 31), he despises Misery, his own creation and his most popular work. What does this tell the reader about Paul?

4. Paul often recalls episodes from his childhood that parallel his current circumstances. The African bird from a visit to the zoo with his mother, for instance. Why does Paul associate himself with the African bird (page 62)?

5. Why is Annie so insistent on Misery’s Return being fair (page 116)? Why does Paul ultimately agree with her criticism?

6. King includes several passages from Misery’s Return throughout Misery itself, even with the missing letters from the typewriter and then in cursive when Paul begins writing longhand. Are these passages necessary? How do they affect the novel as a whole?

7. In the Uncle Remus stories, when Brer Rabbit leads his would-be captors to his “laughin’ place,” it turns out to be a cavern of bees. How is Annie’s “Laughing Place” (page 179) like Brer Rabbit’s?

8. There are references to other King novels in Misery, such as when Annie describes The Overlook Hotel from The Shining on page 219. Some authors create fictional worlds for themselves in this manner, like William Faulkner and his Yoknapatawpha County. What does an author achieve with these references and fictional worlds that span many stories?

9. Discuss the many different kinds of “gotta” (pages 249 and 284) found in Misery. How is each character driven by his or her gottas?

10. Why is Paul also Scheherazade to himself (page 246)? Why does it take him such a long time to realize this?

11. Think of Humbert Humbert in Lolita and Captain Ahab in Moby-Dick, obsessives who lose touch with reality, much like Annie. Why is obsession such fertile ground for unsettling and terrifying characters?

12. The four parts of Misery are titled “Annie,” “Misery,” “Paul,” and “Goddess.” Why is the novel structured this way? How do these section names reflect Paul’s experiences?

1. Watch the 1990 film adaptation of Misery starring Kathy Bates and James Caan. Discuss the similarities and differences between the book and the movie. Misery has also been adapted for the stage. What do you think makes the story work visually?

2. Play a game of Can You? (page 124) like Paul did as a child. After the game, discuss whether it was easier or harder than you thought and what

Stephen King is the author of more than sixty books, all of them worldwide bestsellers. His recent work includes If It Bleeds, The Institute, Elevation, The Outsider, Sleeping Beauties (cowritten with his son Owen King), and the Bill Hodges trilogy: End of Watch, Finders Keepers, and Mr. Mercedes (an Edgar Award winner for Best Novel and an AT&T Audience Network original television series). His novel 11/22/63 was named a top ten book of 2011 by The New York Times Book Review and won the Los Angeles Times Book Prize for Mystery/Thriller. His epic works The Dark Tower, It, Pet Sematary, and Doctor Sleep are the basis for major motion pictures, with It now the highest-grossing horror film of all time. He is the recipient of the 2020 Audio Publishers Association Lifetime Achievement Award, the 2018 PEN America Literary Service Award, the 2014 National Medal of Arts, and the 2003 National Book Foundation Medal for Distinguished Contribution to American Letters. He lives in Bangor, Maine, with his wife, novelist Tabitha King.

SEE ALL
See more by Stephen King
Thank you for signing up, fellow book lover!